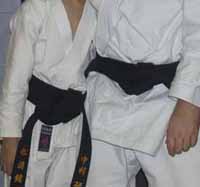 It was nice to have nothing planned for a change other than staying in bed and catching up on some much needed sleep. I remember when The Son would wake me up at some stupidly early time on a Saturday or Sunday then drag me downstairs so he could watch cartoons without being scared that there was no-one else with him. These days he is just as likely to be asleep as me otherwise he is more than capable of making himself some cereal and watching the TV.

The Son accompanied me to karate in the morning wearing his just about big enough uniform. Thankfully his new gi had been delivered and was handed over to me at the beginning of the class. We did not have time to go get changed but next week he will be able to wear something that provides a bit more modesty. The class itself was busy, probably because grading for the lower grades is just a few weeks away, but also high energy and very tiring. We started off with repetitions of basics, leading up the black belt levels, and then moved onto kata. Sometimes we are asked to rotate through the lower grade groups so they have someone to copy but this week the black belts stayed together and went through Kanku Dai, Jion, Empi, and Bassai Sho. The class finished with a new exercise that I plan to incorporate into my weekly gym sessions: 5 minutes total consisting of 30 seconds stationary running in a press up position, 30 seconds plank, and 30 seconds of sit-ups all rotated until the time ends. It sounds a lot easier in theory than it is to perform. 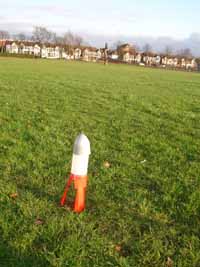 The afternoon was spent helping The Son through some homework before we headed off to a nearby park armed with a science kit rocket that he had been given a few months back for his birthday. It was pretty easy to set-up and just consisted of some water in a plastic bottle shaped like a rocket that you pumped air into with a bicycle pump before it shot up in the air. We had a great time although the water made the ground a bit muddy around us and we managed to bring some of the mud back home with us.

Saturday night means 11+ class so I drove The Son then waited nearby reading a paper and my kindle before bringing him back home again.